The country’s largest lender, State Bank of India (SBI) has proposed merger of its five associate banks and newly created Bharatiya Mahila Bank (BMB) with itself and sought government’s approval for the same — a major bid to consolidate the public sector banking space. 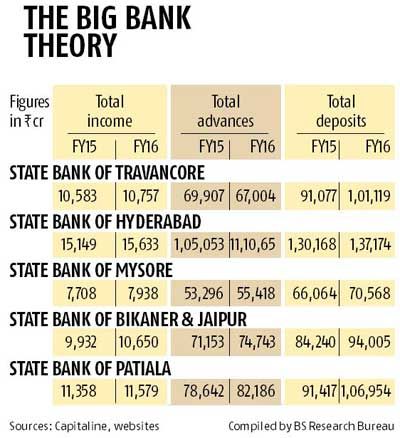 SBI is seeking “in principle sanction” of the Central Government to enter into negotiation with the subsidiary banks (State Bank of Bikaner and Jaipur, State Bank of Hyderabad, State Bank of Mysore, State Bank of Patiala and State Bank of Travancore) and Bharatiya Mahila Bank Limited to acquire their businesses, including assets and liabilities.

No decision has been taken at this stage approving one or more of the aforesaid acquisitions and the same will be taken by the bank’s board upon evaluating all the relevant considerations.

Commenting on the proposal, SBI Chairperson Arundhati Bhattachraya said with the merger the balancesheet size will soar to Rs 37 lakh crore from Rs 28 lakh crore currently. Meanwhile, a section of employee unions have registered protest against any such move and threatened to go on a strike if such a move is approved by the SBI and the government.

In this regard, SBI has informed the Bombay Stock Exchange (BSE) that it is seeking in-principle approval for acquisition from the Union Government.

Besides, the boards of the subsidiary banks and the SBI also met individually in Mumbai to begin merger talks to acquire the businesses including assets and liabilities.

The merger move comes after the Union Government had announced a road map for bank consolidation during the 2016-17 Union Budget. This was seen as necessary to meet the huge infrastructure financing needs of the country. It also seeks to feature Indian Bank in the top 50 banks of the world in terms of size as no bank in the country features in it.